You play as a farmer who has to defend his animals from the horrifying animal-eating robots. You have the ability to kick them away or shoot them to bits with a pistol, shotgun, machinegun, flamethrower, or a huge rail gun. But you also have to make sure that your animals don’t run too far away. That’s why you can kick them around to keep them safe.

In between each round of 30 seconds, you’ll get the possibility to spend the money you’ve earned by keeping your animals alive on new weapons or more animals. When you lose all you’re animals, it’s game over and your highscore is saved. You can’t win in this game. More and more robots spawn after each round, and the game doesn’t stop getting harder, so you will lose at some point. 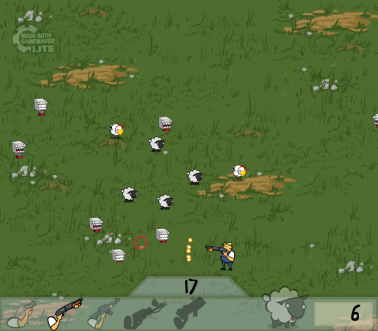